Since late 2009, Greg and Fiona teamed up to re-educate, re-skill and re-invent themselves as the Laptop Lifestyle Experts, having leveraged the internet to set up their own successful online business.

They built a lifestyle business so they could explore, have adventures, and travel the world on their terms.

It’s this lifestyle which permits them the time to give back, help change people’s lives, and champion other corporate workers to question the status quo and open their eyes to the abundant opportunities existing online.

Greg's parents dictated he ‘get a trade', but the impressionable 17 year old wasn't keen to get his hands dirty, so started his working life as a bank teller, then quickly moved into the world of shipping to extend his horizons. When the internet was “born” for public use in 1991 he developed a fascination for databases and information systems, after single-handedly ‘wiping out' an entire shipping database. This ‘small mistake' prompted him to study computer programming at university when he was 29, which lead to web development roles in large corporations.

Straight out of school, Fiona escaped the shackles of a working class upbringing, having won a Government Scholarship to fund her study of Accountancy at University. At the time she (wrongly) believed numbers must be her strength following poor school report cards for English, writing, and creativity. Qualifying as a Chartered Accountant in 1987 at the age of 21, she married Greg, (her childhood sweetheart) the same year, and quickly learned to promote herself to land plum finance roles in New Zealand and London, England – travelling the world together in between times!

Like many Kiwi’s they “flew the coop” in 1990 – Greg had read too many National Geographic magazines and Fiona was inspired by the Bolivian pairing in a children’s card game, Old Maid – so the travel bug was hatched. Fast forward to today, having circled the world countless times and spent at least three full years traveling together, they have a huge passion for exploring and discovery, crave pure adventure, and get a big kick out of experiencing other cultures.

But . . . the Scott’s world fell apart in 2009 at the end of a three month round-the-world sabbatical, which was reward for nine solid years of corporate dedication. One phone call, received in Bangkok, changed everything.

Fiona was laid off.

What's worse: Greg had resigned his job to get three months off to travel together.

Their backs were against the wall.

But, every cloud has a silver lining.

Greg & Fiona quickly realised the wonderful opportunity they faced – they had the breathtaking chance to thumb their noses at the status quo, and escape the corporate rat race – to quit the stress, long hours, commute, and hard work to make more money for the boss.

They realised, before their sabbatical, they’d been so exhausted that getting out of bed to enjoy weekends was a problem. They had little time or motivation to exercise and prepare proper meals, which led to weight gain, low self-esteem, and drinking too much.

They’d been stuck in a stressful work situation, where it was tricky to distinguish the wood from the trees, and even trickier to admit and accept it had impacted their health and happiness.

There Is A Way Forward

After a ton of consideration, they chose to combine their expertise, and leverage the internet to build a lifestyle business which would allow them to explore the world, have adventures and love life once again.

That decision was easy to make – making it become a reality wasn’t so easy.

Learn From The Young?

In 2010 they met Stuart Ross, a 29 year old digital entrepreneur making seven figures online, who was able to share the proven formula that was working for him.

He helped them cut through the mire of information, overwhelm, and confusion, in the world of affiliate marketing and referral marketing.

It was like being pulled out of quick sand – they learned to focus on one thing at a time, so made progress and got results straight away.

Follow One Course Until Successful – was the motto they embodied that year.

By 2011 they’d learned the equivalent of a bachelors degree at university, and had made many mistakes, BUT… had developed a passion to give back by helping others. They felt a responsibility to help people like them to learn from their experiences, by providing honest, expert guidance which anyone with no experience could follow. Living A Laptop Lifestyle was born (written by a person who'd believed, for 44, years numbers were her thing and not words!), and published in early 2012. 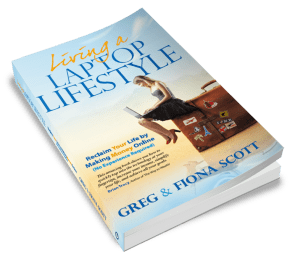 “This amazing book shows you how to quickly tap into the technology at your fingertips, increase your income, simplify your life, and achieve all your goals.”

And their mentor, and co-founder of Digital Experts Academy, Stuart Ross said:

“Greg and Fiona Scott’s excellent book shares unique insights into their journey from being made redundant to making money online and living the laptop lifestyle: working with a laptop where they want, when they want, and how often they want. I would highly recommend it!”

Their book was a Finalist in the 2012 National Indie Excellence Book Awards, the 2013 USA Best Book Awards, and the 2013 International Book Awards in the category for Entrepreneurship and Small Business.

In the process of making themselves unemployable, Greg and Fiona learned to manage their time carefully, to engineer having the much touted time freedom most people desire. They were talking about Living A Laptop Lifestyle at an education event Stuart organised in 2012, when they met Jay Kubassek. Jay's a self-made millionaire specialising in direct sales, but he also promotes a unique and totally unconventional methodology for success, which the Scott’s adopted.

Sensing The Scott’s personal professional values were closely aligned, understanding their desire to give back, and knowing they had their time freedom sorted, Stuart and Jay sought them out to coach a couple of days a week at the Gold Digital Marketing level in the newly launched Digital Experts Academy (DEA). It was then they learned the transformational value of education and leveraging a linear step-by-step training program.

DEA is an entrepreneurship incubator that helps aspiring entrepreneurs around the world become financially self-sufficient in the new digital economy, by providing cutting edge education curricula in the areas of marketing, leadership, personal branding, and entrepreneurial skill-sets. Currently, the pre-requisite for enrollment in DEA is first applying for the Affiliate Marketing training offered by sister company, Six Figure Mentors http://sixfigurementors.co.uk. Greg and Fiona quickly realised SFM/DEA was the vehicle which would allow them to help change lives on a broader scale than they ever imagined.

Pot of Gold at the End of the Rainbow

They backed themselves to win sales competitions, having had NO sales training. They turned a catastrophe into a success by embracing their passion for travel and adventure to build a lifestyle business that supports it. Most importantly, they discovered an inner pleasure in giving back, and made it their mission to open people’s eyes to the fact they don’t have to work in a 9-5 job for the rest of their lives.

Their driving force is: to spark people's imagination so they ignite their passion for a life that matters.

The Scott’s have funded many philanthropic organizations including:

Their most cherished experiences are:

When they’re not gallivanting around the world, Greg and Fiona love skiing, scuba diving, hiking, cycling, dining out and socializing with friends. When they are home, they live in central London, within easy reach of five main airports.