How Safe Is Your Job From The Bots?

Home » Blog » LEARN TO EARN » How Safe Is Your Job From The Bots?

What'll happen to your livelihood when you act like an ostrich and stick your head in the sand to ignore history, ignore progression, and ignore simple economics?

It'd be super easy to dupe yourself into believing it's not happening and it won't affect you – but that'd be daft.

Robots that'll do your job.

Let's take a look shall we? (Click to watch)

Mechanical muscles killed much of the need for human labour. And the same is now happening with our human minds. They're being replaced by mechanical minds. Replaced by robots.

Watch the video above for more examples. And keep a close eye out for the ‘luddite horse' example at the 3:34 minute mark – it'll raise your eyebrows for sure. 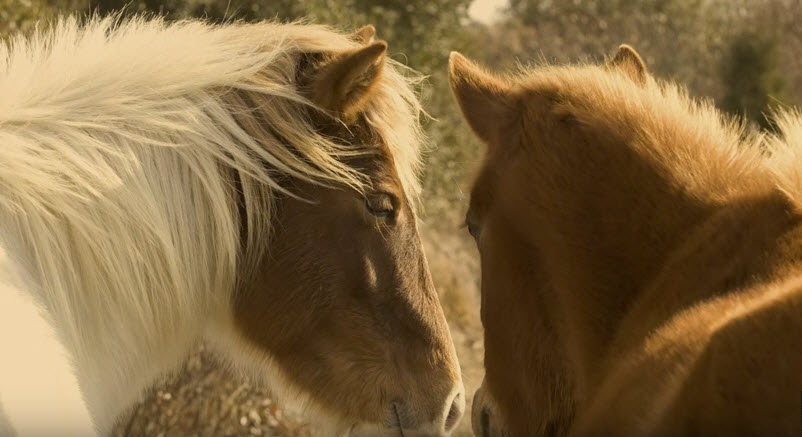 Imagine two horses talking to each other about technological advancements back in the early 1900's!

One horse says says to the other: “I'm really worried these new fandangled car thingies will make us horses redundant”

The second horse reminds the first that everything so far has made their lives easier. He says: “We'll have no more drudge farm work, no more relentless pony express mail deliveries, and no more bloody cavalry battles.”

He then said: “All the people are moving to the cities so there'll be more cushy city jobs for us horses than ever before. Even if that Mr Henry Ford chap is right about his automobile, there'll have to be new jobs created for us horses which we haven't yet thought of.”

Sure, there are still working horses in the world, but only a teeny fraction of the horse population in 1915 when at it's peak.

Are horses not employed now because they got lazy as a species? Nope. They're unemployable because their feed, housing and hay isn't cost effective for the jobs they do.

It's OK talking horses, but what happens when we switch from horses to humans?

As mechanical muscles pushed horses out of ‘making a fair crust', so will mechanical minds do the same for humans.

The human'll be there to feed the dog…

The dog'll be there to ensure the human doens't mess with the equipment!

(This applies to factory workers, mid-level managers, right the way up to top sales and executive people)

This can put you in grave danger IF you stick your head in the sand and don't embrace change.

People get laid off unexpectedly because of technological advancement and have a super hard time picking themselves up again after such a big blow.

And the OLDER they are … the more CATASTROPHIC.

The evidence is all around you – there's staggering numbers stated in this CNBC article which leads to one prognosis that:

Bank tellers will be the telegraph operators of 21st century when we look back in 100 years, the most-impacted job. This will hurt.

Read on if you still think your role/job/career/skill is above reproach from the fast encroaching mechanical minds.

Will You Ignore Progression?

Meet Baxter (you would've when you clicked to watch the video above). He was ‘born' in the 80's. He has vision and can learn to do whatever you want him to do. OK, he might be slow – but he's extraordinarily cost effective. (More on that in a minute).

Think about how automatic checkout machines in modern supermarkets have replaced 30 human check out operators. (undetected item in the bagging area – arrrrgh!)

And that hundreds of thousands of baristas worldwide are being replaced by robotic coffee makers connected to a network which remembers exactly how you like your coffee no matter where you are in the world – pretty convenient really! Not for the minority super snob coffee officionados – but for the majority of us who just want a decent cup of coffee – FAST!

Why will robots take over???

Because their mechanical minds are capable of decision making, so they're already in competition with humans for their jobs.

Technology gets better at a rate that's quicker, cheaper, faster than human biology!

Self driving autos are an insurance companies wet dream! Because they don't crash.

Now you might be thinking – Ha! we have unions to protect entire industries. BUT…

History is riddled with instances where workers and unions battled against technological advancement.

The result is WORKERS ALWAYS LOSE and ECONOMICS ALWAYS WIN.

But what about white collar workers?

Will You Ignore Simple Economics?

Maybe you're employed in an office job where you sit in front of a monitor or screen and type and click your way through the day – guess what – the bots are coming for your job too.

Show a bot a bunch of correctly done stuff. Show the bot what to do. And it'll figure out what needs to be done.

Bots have learned to write.

Bots can handle paperwork, decision making, writing – among other things. So the demand for human mental labour in these areas is becoming redundant, obsolete, out-dated.

Surely the professions are safe, you're probably thinking?

Well, clever research bots have mastered the art of discovery in the legal profession – which impacts the human legal eagles as robots are super quick at scanning information, super accurate, and super cost effective.

What about the medical profession? Surely they're safe?

Consider IBM's super computer WATSON – Watson already understands medical conditions people describe in their own words, and provides diagnoses. This overcomes the humungous human doctor failing of not being able to know every ailment, every cure, every medical advancement, the side effect of every drug, and the effect of combination of drugs. (Makes you realise how humanly flawed your local doctor really is).

So imagine such diagnoses being delivered on your mobile phone? Saving you a trip to the Doctors? Think that'll catch on – without sparing a single thought for the Doctors being done out of a job?

Bots outsmart us humans at chess. Bots think. Bots can be creative. Watch the video above for examples of stuff they already achieving.

Look Closely At The Numbers…

It's all too easy to put your head in the sand and ignore this stuff. But, this stuff is not science fiction.

The robots are here right now. They're getting cheaper, faster, smarter.

The robot revolution is different to anything we've lived through in the past. It's completely new ground. NOTHING stands in the way of progression when economics, finances, and efficiency are concerned.

Many bright people will wonder what hit them when bots take their livelihood with no chance of finding another job in the same industry. Remember the horse who became unemployable through no fault of his own? And remember the horse thinking new jobs would be created for it that haven't been thought of yet?

Well there's a list of jobs that are at huge risk of being made obsolete by the bots. Is your job one of them?:

This list above accounts for 45% of the work force. And with the bots existing today, we'll be pushed to about 25% unemployment levels real soon.

According to this handy wee tool on the BBC's website – there's a 95% chance of all Professional Accounting roles being taken over by the bots. 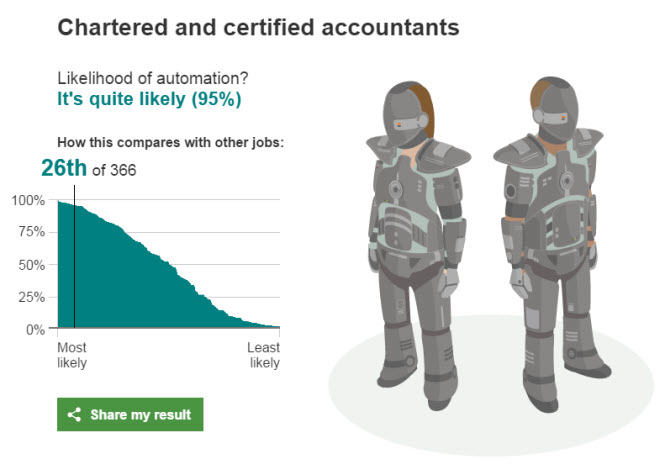 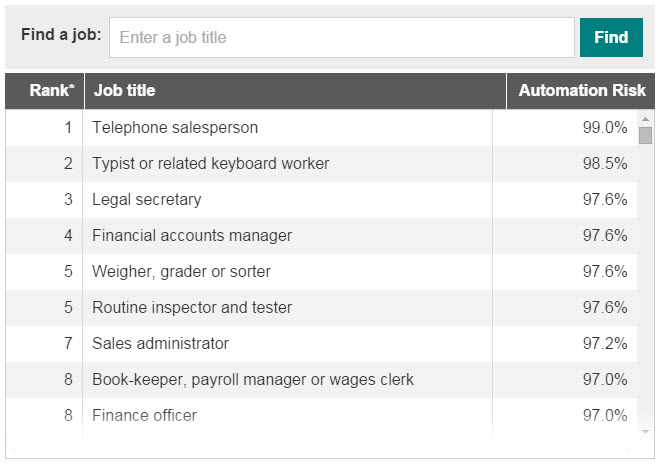 What percentage does your job score?

Now this post isn't about bots being bad. It's about bots being inevitable and you need to think what you'll do NOW, so you get the jump on your fellow workers when your industry is made redundant through no fault of your own.

What Will You Do In A Future Where HUMANS NEED NOT APPLY?

It's going to be a BIG problem if you're not prepared. Are you ready for the change that's already happening?

The key to thriving in spite of the bots is awareness of what's happening (which you are now) and positioning yourself for the future.

The way we see it, you have a choice. Either lay spread-eagle across the railway tracks waiting to get run over, or stand up and embrace change before change embraces you!

Or, put it another way – either risk robots, tech, or somebody across the globe taking your job, or…

Engineer “the system” to work in your favour, so you harness the power to work less… 5X your income… and have the freedom to enjoy life to the full

So, how can you grasp a real possibility in this new digital economy?

Yes! We’ve seen different people do it over and over again…

You may have heard of other success stories too?

With the right automated income system at your disposal, you can make more money in a week while committing less time than 40+ hours each week …

But only with the right system, of course.

It can be way easier than you imagine…

And way less technical than you imagine…

And way more satisfying than you imagine 🙂

We're speaking from experience here. Back in 2009 we began to understand the power and leverage we could get from using a simple turn-key online system to build a business around our lifestyle rather than a lifestyle around our business (almost every entrepreneur gets that the WRONG WAY ROUND).

But at first, it was a struggle because we didn't have an ‘idiot proof' system – so we ran round like headless chooks trying to devise our own system.

We frittered our hard earned dollars on hair brained schemes that were materially wrong for a variety of reasons.

And we wasted precious months not seeking the advice of entrepreneurs who were already successful, in order to understand what was working for them.

When we joined Six Figure Mentors in 2010… success happened, we got results, we helped others, we found satisfaction and reward, and now we live life on our terms. We never had that ‘working for the man'.

It's obvious that our recommendation for you is to…

Get started NOW. Learn from the best training in the world (OK – we deliver the marketing coaching so we're biased), join the most positive community of bot-evaders we know, leverage their simple turn-key online system AND have a more time freedom to boot!