What Manjhi Can Teach You About Commitment

You’re working long and hard to get what you deserve in life and give your family every little comfort they cherish… BUT you’re just not getting the traction and momentum you expect.

You’re not getting the ‘leg-up’ you hope for after a long period of corporate servitude.

Yet another round of restructuring looms, where the only people rubbing their hands with glee are the contracted advisers (they've seen it all before).

You’re battling the status quo which is a broken model not serving anyone.

It's a story of courage, consistency, and commitment.

It all started in a remote rural village called Bihar in India.

The village was poor so had no services. Villagers had to WALK to the neighbouring village to go to the market, go to school, and go to the hospital.

Which doesn’t sound too bad does it? Many people in the western world expect to have to commute to their jobs each day, every day!

However . . . there’s a MOUNTAIN in between the poor village and the rich village, and it’s a 70km walk AROUND the mountain to get to the markets/school/hospital – which is a long old hike there and back each day, every day, in anyone's books.

Not to be deterred, the people from the poor village would scramble OVER THE TOP OF THE MOUNTAIN – a treacherous journey – a craggy ascent, then a rough trek back down again. And that’s just one way.

So the people from Bihar had many accidents on that mountain. And broke many precious possessions in their falls. 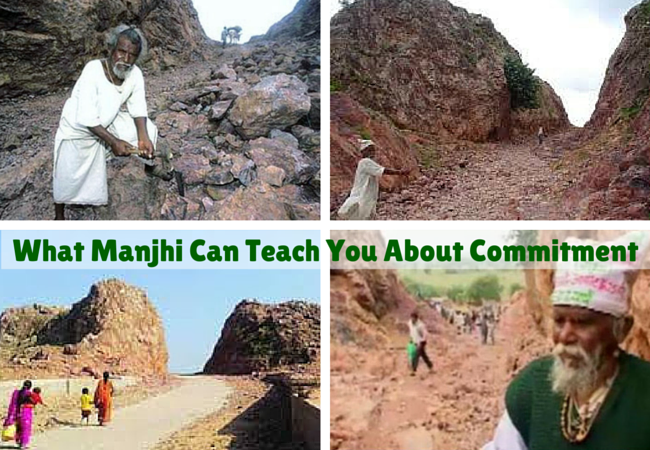 One day, a local labourer, Dashrath Manjhi, was making the journey with his sick wife, and she slipped and badly hurt herself.

That accident was the CATALYST Manjhi needed. He realised “enough was enough“.

He decided to cut a road through the mountain because he wanted the people of his village to have easy access to doctors, jobs, education, and opportunities.

Armed with only that hammer, chisel, and crowbar, he started to carve a road through the 300 foot high mountain.

They Thought He Was Completely Bonkers

For a living Manjhi used to plough other people’s fields by day, then chip away at the mountain at night.

People took great pleasure in telling him he couldn’t do it.

Have you ever been told you can’t do something? It makes you even more determined and resolute to do it doesn’t it?

Manjhi’s wife supported him, but unfortunately she died due to a lack of medical treatment! That made Manjhi even more determined to build the road to benefit the whole of society, but also as a tribute to his wife.

When The Going Gets Tough, The Tough Get Going

He finished that road carved through the mountain.

THE MORAL OF THE STORY IS: when you want something worthy of working towards, you need to have courage, consistency, and commitment.

No job is too big. No mountain too big. No task is insurmountable when you’re resourceful.

It’s the same with building an online marketing business.

You need to be determined to succeed.

An online business is a LIFESTYLE BUSINESS, so it’s definitely worth working smart for. You need to consistently do the money making tasks on a daily basis (that’s building your list, blogging and broadcasting), day in and day out.

Rise to the challenge – and keep the naysayers at arms length (because there WILL be people who'll say you’re crazy and who'll be out to snatch your dream right out from under your feet!).

Be prepared to soldier on and overcome problems that'll stump you every now and then.

Be prepared to chip away at big tasks, and break them down into achievable chunks you know you can do.

Be prepared to benefit and enrich other people’s lives with the products you promote and the wisdom you share.

Remember, living life per your values is a huge prize worth striving for.