2 Special Reasons Why We Think Honesty Is The Best Policy 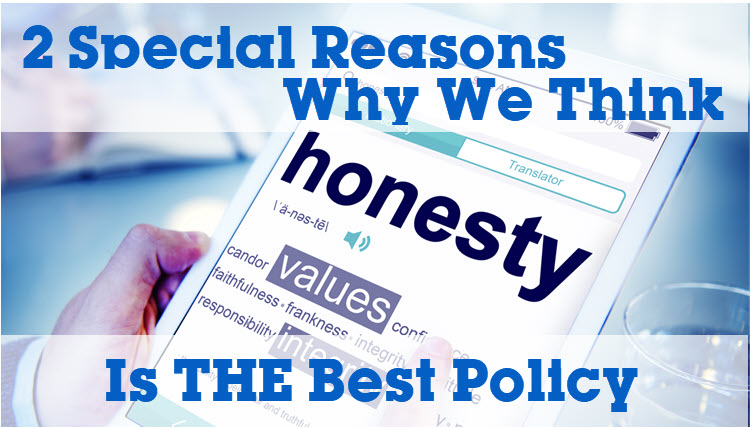 You’ve seen them. They offer boundless riches. Imply it’s promiscuously effortless. Can be achieved in next-to-no-time.

… they grab your attention, perhaps even have you hovering to click, but uncertainty rears it’s ugly head because something doesn’t quite ring true. Right?

Your rip-off radar’s triggered. You wonder if it’s too good to be true?

You’re wisdom is borne from personal experience, not from speculation.

It doesn’t serve anyone by writing spectacularly misleading headlines/claims/offers like that. Most people are wise to them nowadays. People can sniff a lie, a mile off.

“A lie gets halfway around the world before the truth has a chance to get its pants on.”

Hopefully, you haven’t seen such ‘false’ reviews – where the article offers to provide a ‘balanced’ assessment, but uses emotive language like ‘whopping’ or ‘prohibitive’ or, dare we say it, ‘scam’, and the article is quite one-sided or completely imbalanced.

Articles like that are written for the single deceitful purpose of snaring unsuspecting ‘victims’ into their clutches. Which is misleading, dishonest, and mal-intentioned.

A word of warning:

There are many slimy underhand marketers ‘out there’ who publish false reviews online, which are NOT based on first-hand experience, and are NOT written with the intention of providing an honest, upfront, well-balanced review for the reader.

The simple truth is,

Their actual intention is to insincerely lure you, the reader, into a false sense of trust, so they can shove their own shady, sneaky, duplicitous offers in your face!

We don’t condone that kind of crap, and recommend that being forewarned is being forearmed – if you ever find yourself being mistakenly drawn in by such dross.

A stranger messaged us on Facebook recently to ask why, when he went looking for ‘dirt’ on Six Figure Mentors, he didn’t find any of our blog posts (that’s because we don’t write drivel). He sent us to one post which prompted us to record the video above.

The blog he referred to was written by a chap (we never name and shame) who’d published one blog post slagging off one competitor, another post dissing another competitor, and yet another post slandering yet another competitor. In about 10 or 15 posts on this chap's blog, he’d slated every single online training system he could think of. He declared every program was rubbish for one reason or another, and the only thing good in the world was him and his training! Yeah Right!

When you read between the lines in his blog posts, he says “Oh this competitor’s program is rubbish, BUT… I've got a system that's going to work really well”.

Writing nonsense like that is simply an underhand and dishonest way of marketing.

Something we never do is slate the competition. It's not an authentic way to market, nor a proper way to attract people to a business, because they’d be duped for the wrong reasons.

Predicated on a lie…

Yes, it's unethical and underhand, but what's more, all the posts on his website were predicated on a lie.

When you think about it, the people he’s attracting will not share his values, will not have any affinity for him, and eventually, will distrust him.

At the end of the day, yes, he might be able to sucker some gullible people into his scheme – for five to ten minutes – but those people will eventually wise up. Long-term, he won’t build a trusting relationship with people when coming from the space of untruth in his blogs.

The experience of reading that guys blogs, prompts us to share a couple of instances from days long past. From our childhoods. Raw experiences and learnings which shaped our values we operate by today.

When I was a kid… probably around about nine or ten, I guess… growing up in shaky (earthquake prone) Christchurch, New Zealand… my best friend Mark and I had been allowed to go to the movies together in the centre of town, one sunny Saturday afternoon.

I can distinctly remember the movie… it was a James Bond movie with Roger Moore (so that'll give you an idea of how young I was then). It had Jaws in it – you know – the guy with metal teeth?

Before the movie, Mark and I went into a lolly shop (that’s what we called it – probably call it a sweet shop now days). Back then, in the cinemas, you could only buy ice creams that were frozen rock hard – you couldn't buy individual sweets.

I went over to some packets on the shelf, and said to Mark:

“Look how easy it’d be to nick some of this stuff.”

I picked up an item, then put it down again – went elsewhere in the store and picked up another package and placed it down again. We both laughed and sniggered about how easy it’d be to nick stuff, like a couple of school boys would.

When we walked out the shop – the smirk got wiped off my face – I was patted down and searched through every pocket.

Someone had been watching us all along…

That truly scared me into realising: honesty is always the best policy. That's something I've taken to heart for the rest of my life.

That experience really terrified me, and taught me a huge lesson when I was a wee kid, which has carried through my life to today. 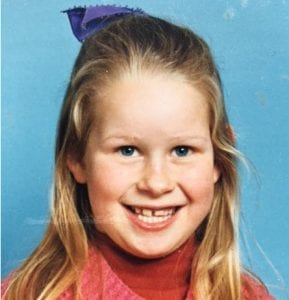 My story’s similar to Greg’s!

If you were with me when I was seven, you’d see me holding my big sister’s hand, as we walked down to a lovely craft fair in the local town hall.

A couple of Christmases before that, I'd been given a doll – she was gorgeous, had long, luscious dark hair, and I named her Gina. I simply wanted Gina to be dressed to impress – better dressed than me, as I wore hand-me-downs, and hand-knitted, home-made clothes.

There were many displays of hand-crafted dolls clothes at the town hall fair. I'd got separated from sister so was by myself – faced with gorgeous, Gina-sized, dolls clothes – beckoning to me. There was only one short, middle-aged woman behind the stall of dolls clothes, and I can remember my childish innocence thinking:

“Well, I don't have any money with me because Mum hasn't given me any, so I can't buy anything.”

“If I just whip it off the edge of the table, and put it in my pocket, no one will know.”

But, when I got home… oh my goodness – it’s something I’ll never forget!

One the way home, I’d told my sister what I'd done. I thought she’d be my confidante, but of course you know what sisters are like, she immediately told Mum that I’d stolen the dolls trouser suit.

I got the absolute hiding of my life. I was put in ‘no-go territory’ for about a day.

However, that's not all…

What’s WORSE, Mum made me take that dolly’s trouser suit back to the stall-holder at the town hall fair. She marched me down there, made me hand it back, and make me apologize for having pinched it.

I will never forget that humility to this day!

It's the same as Greg’s experience in the lolly shop befoe the movie, it's something we both learned while we were young: – stealing, dishonesty, and telling lies, don't serve us, or have any point of gain whatsoever!

So, to this day, honesty has been one of our core personal values.

No doubt about it

When someone questions what we’re doing online – we're fine with that because in our heart of hearts we know we’re solid in our values – and one of our big values is honesty.

When someone questions why we don't publish scam posts… we feel like running a mile, because it's totally out of line with our values.

And when someone alludes we’re dishonest, it raises the hairs on the back of our necks because it questions a value we hold true to ourselves. We take a sharp intake of breath, remind ourselves everyone has their own unique view of the world, ignore their negativity and clouded judgment. Exhale. Move on.

“No legacy is so rich as honesty.”

To cut a long story short…

These little stories demonstrate how we live life and the ethics underpinning how we market.

The way we market doesn’t always gel with some people as we don’t ever make false promises or ‘gild the lily’. And that's OK with us.

There are many variation and styles of marketing online today. Everybody comes from a place of resonance with their own values. We always treasure our values of upfrontedness (is that a word?), truthfulness and honesty, simply because of the lessons we've earned the hard way at such young ages.

We hope that resonates with you?