Cashing In On The Digital Gold Rush

Thanks to Living A Laptop Lifestyle we lived on the Gold Coast of Australia for three months back in 2013 (plus long stays in many other countries since – in 2015 alone we only spent two and a half months at home in London).

Whilst we were on the Gold Coast of Oz, we were able to give back to our parents – by flying them out for a two week holiday. We hosted a big family barbeque on Mothers Day, celebrated birthday dinners out, and treated them to things we've never previously been able to treat them to. Which gave us a hugely warm feeling of satisfaction – and gave them a wonderful break too.

One of their highlights (and ours too) was Seaworld – it's one of the best family attractions hands down. We spent the whole day there, watched all the shows and had a fantastic time! There are dozens of theme parks and outdoor attractions on the Gold Coast, so there's something for everyone. 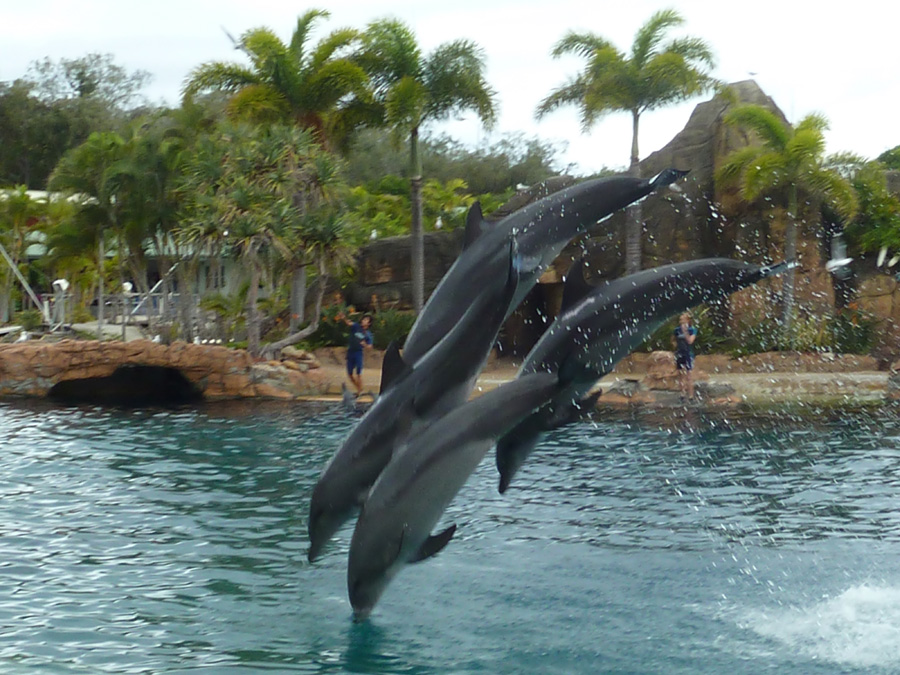 But here’s the key thing: The Gold Coast is a Gold Mine.

There are thousands of businesses making lots of money and it reminds us of the big Californian Goldrush in the 18th Century because there are many similarities.

Since 1989 (When the World Wide Web was invented) a lot has happened and the Digital Economy has exploded with growth.

More recently in 2007, we all know what happened; the bottom fell out of the traditional economy. Those on the cutting- edge profited wildly while most were caught with their pants down (us included!).

The Digital Economy was less than 20 years old at that point, and as you can see in the infographic below, it literally EXPLODED with growth.

No different than any other time in history, every major recession/depression simultaneously caused a new revolution… (We’ll go over more about this in a minute).

This is what’s called the Digital Gold Rush

BUT, the Gold Rush itself ISN'T where the big money is made!

Read this next bit carefully:

The big money, the walk-away-income, goes to those who are correctly positioned to take advantage of the Digital Marketing Arbitrage – by helping people still stuck in the traditional economy exchanging time for money, to transition to the digital economy. 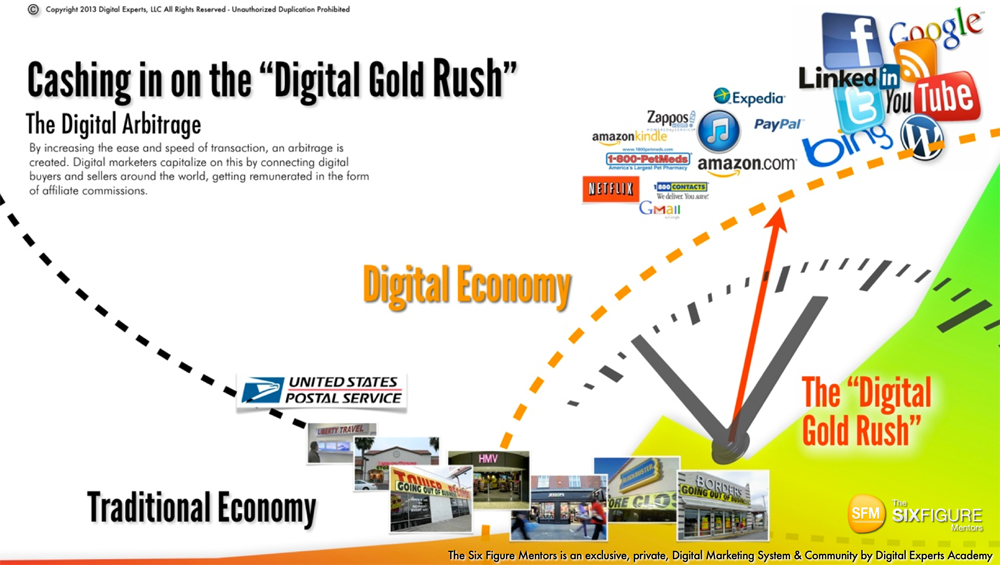 Economist Paul Zane Pilzer predicts TEN MILLION new millionaires will be created within the next 10 years.

How is this possible you ask? It's like this…

The secret to YOU being able to create a Digital Life is NOT studying marketing at University, inventing your own product, or being the next Mark Zuckerberg.

You don’t want to compete with Amazon, Google, or Facebook, or the zillions of tech startups arriving in the online world every day.

You don’t want to compete with companies which are funded through venture capital with millions of dollars.

You don’t want to compete with Harvard grads with an IQ of 170.

Honestly, it's no different from the original Gold Rush, where gold diggers were crawling over each other looking for that shiney rich vein of gold.

There’s stiff competition online, there’s no question about that.

Just as we mentioned above, more money was made by the middlemen – the merchants selling picks and shovels to the miners; than those digging, panning, and mining for gold.

Do you get what we’re saying?

Are you following the lesson history has taught us already?

The REAL money is in servicing the Gold Rush, not competing in it!

More wealth was created SERVICING the Gold Rush than from the gold that was discovered!

There will always be people creating solutions, products and services to meet other peoples’ problems, wants and needs.

More specifically, there are millions of people and businesses still stuck in the traditional economy exchanging their 9-5 time for money and spending 80% of their time with people they don't really care for. They need our help!

This is where YOU come in as an authorized DEA re-seller (Six Figure Mentors Member).

Throughout history, there have ALWAYS be middlemen connecting buyers and sellers.

These people are sometimes called merchants.

A retail merchant (or retailer) sells commodities to consumers (and businesses).  A Member of Six Figure Mentors is such a merchant.

An Six Figure Mentors Member connects people still struggling in the traditional economy with a solution to help them get their business successful in the Digital Economy.

The SOLUTION is Digital Experts Academy.

Merchants have been playing this role for centuries, and this is one facet in the world of commerce that hasn’t changed.  There is, however, an important twist in today’s digital economy.

As a result of the Digital Revolution, every physical product that can be digitized will be digitized at some point.  This is a foregone conclusion.  What this means is that, as the physical world transitions to the digital world, there will be more and more opportunity for “digital merchants.”

Think of the Internet as a giant farmers’ market, where people can come to buy and sell digital products.

Unrestricted by physical location, supply chains, production and inventory there are billions of transactions a day.

This is where “digital merchants”, (also known as “affiliates”) come in.  The affiliate simply connects the buyer with the seller and gets paid a profit instantly.

Unlike the merchants like Levi Strauss who traveled 18,000 miles from New York to set up a supply business for the Gold Rush, there are no physical restrictions for trade and commerce within the digital economy.

Unlike the traditional economy where physical products are produced, shipped, and exchanged for local currency in physical locations and storefronts around the world, In the Digital World there is no physical inventory.

Thanks to technology virtually anyone can create a digital product and sell it to anyone else connected to the Internet.

There are no physical or visible distribution channels (trucks, trains, planes, etc.)  The customer chooses the product that he or she wishes to buy on the Internet, and the transaction takes place.  The affiliate is invisible, and in most cases the buyer never even knows about the affiliate.

The affiliate didn’t create or produce the product.  He/She didn’t stock, ship, or service it either. In most cases, they didn’t even create the marketing materials, or process the payment.  All the affiliate did was connect the buyer with the seller and get paid a commission.

Can you imagine getting just a tiny slice of that!?

All of this is NOW POSSIBLE thanks to the digital commerce (aka ecommerce).

Arguably, once you’ve learned digital marketing as a skill-set, you’ll be able to write your own check for life.

The reality is, most modern day merchants (affiliate marketers), never make any significant money.  The competition is fierce and commissions are minuscule.

As a member of Six Figure Mentors, most of the learning curves and costly mistakes are avoided. Instead of learning everything on your own, Six Figure Mentors teaches you all of the skills, strategies, and techniques you need to become a successful re-seller of Digital Experts Academy product line, giving you the potential to earn you thousands of dollars a month in commissions.

If you haven’t already done so, check out this brand new video:

Discover Exactly What The ‘New Rich' Know About The BOOMING Digital Economy And Why Now Is The Time To Cash In!

Finally, here’s a question for you:

“What will you do with YOUR digital life?”

Will you take action now and be one of the proactive ones who ALWAYS profit, regardless of what the economy does?  Or will you bury your head in the sand and let the digital gold rush wash right over your head?

Make a decision you can live with…